Good afternoon everyone, I truly hope that you all had the merriest Christmas and the happiest start to your new year. I for one had the fullest heart throughout these two holidays being able to spend time with mine & Jordan’s family. I’m also ready to conquer new, exciting goals I have set for myself in this new year.

Today’s post is full of very Christmas-y things and some extra celebrations. Jordan and I have quite a few family members that were born in December, Brittany graduated from college, and we also have some fun family traditions that of course were carried out this year as well. So let’s begin: 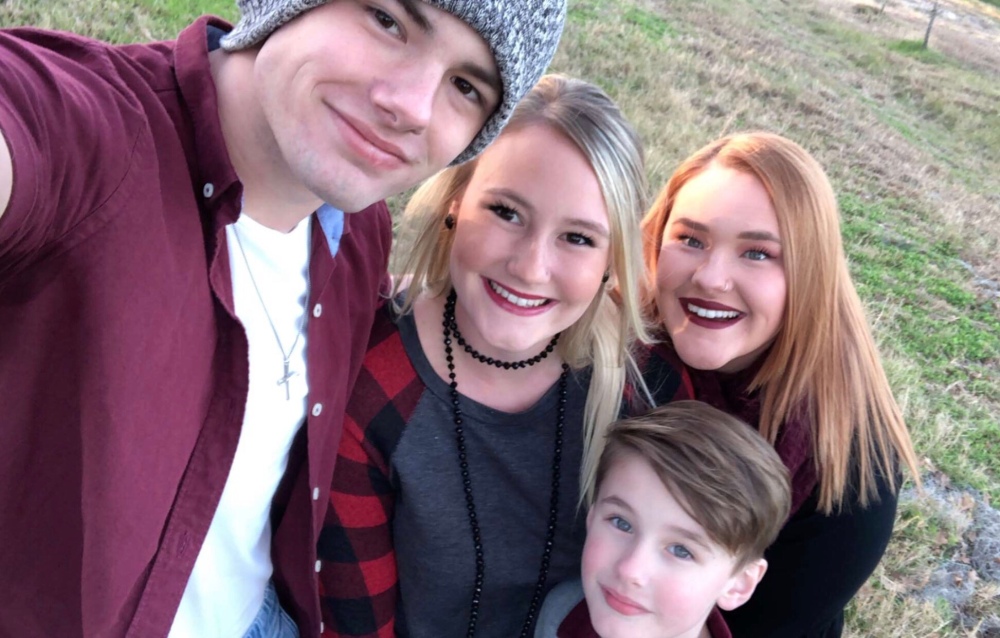 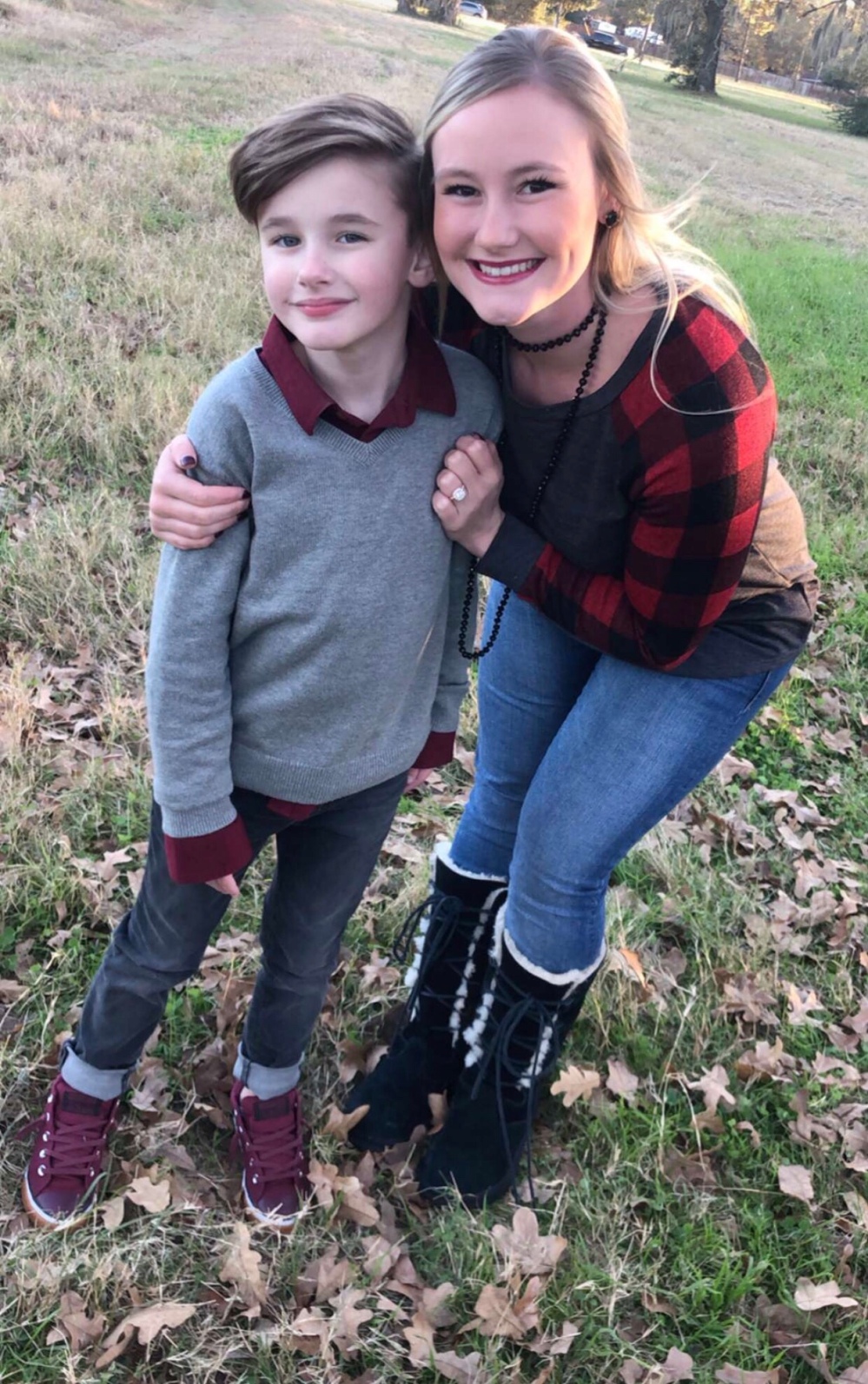 I met up with my family at the very beginning of December to take some family photos. The pictures turned out great! After the picture taking was over, we all headed to my parents house for dinner and to decorate their Christmas tree. 🎄 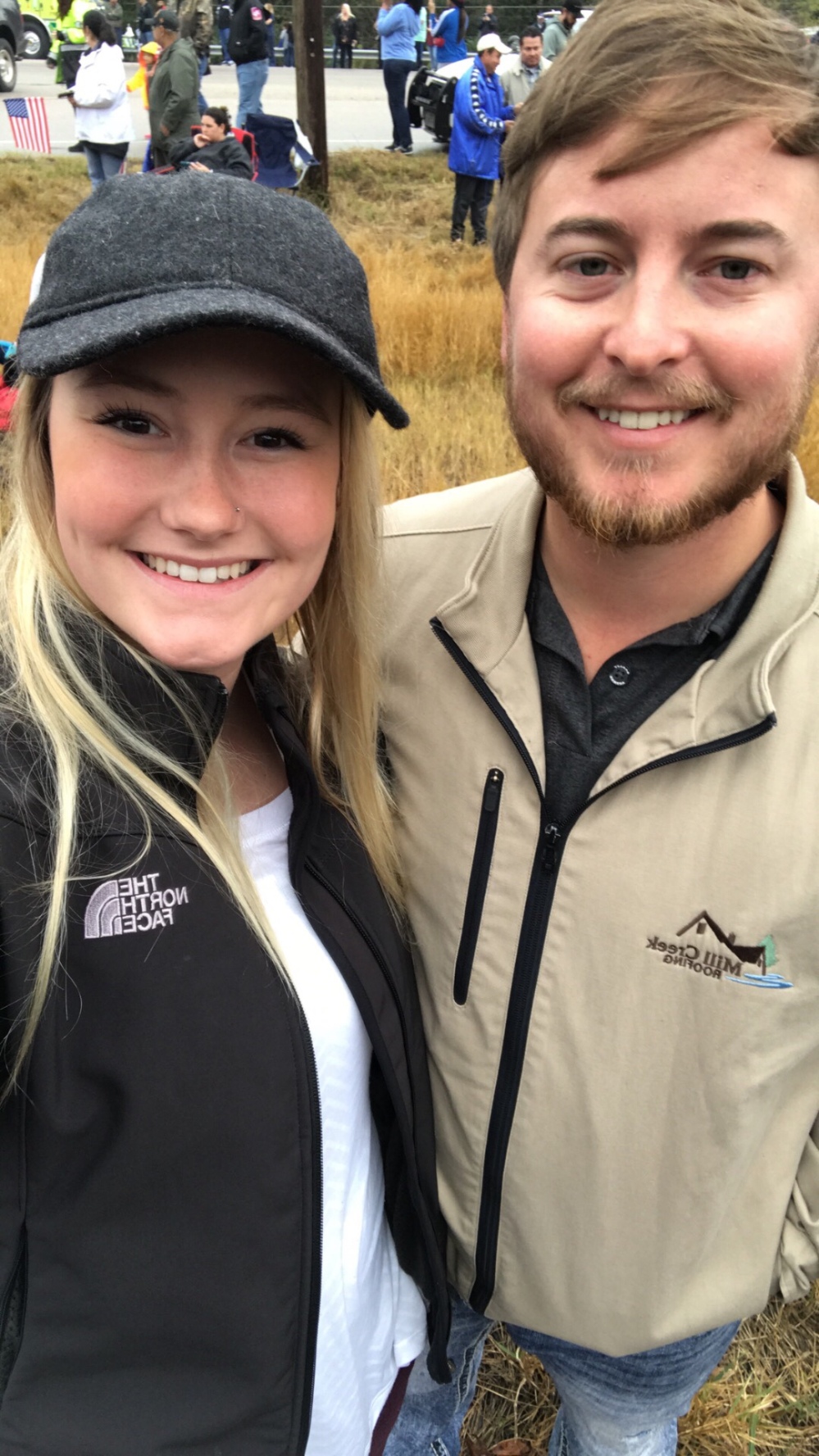 On December 6th, Jordan and I were able to experience a historical moment together. On our way home from the Toasted Yolk, we decided to stop at the railroad tracks near our apartment and waited to view the train that was transporting our late President, George H.W. Bush, from Downtown Houston to College Station for his burial. It was such an amazing & patriotic thing to be apart of. We even put a couple of pennies on the tracks before the train arrived. We were only able to find one of them, but it looks so neat and I want to go get it engraved.

That same day was also my brother, Davis’, 17th Birthday. My parents threw him a “Grinch” themed party at the house. We had CiCi’s pizza for dinner and cookie cake for dessert like we do every year for his birthday. I always love how Davis chooses to do Christmas movies like “The Grinch” or “Elf” for his party theme each year. I can’t believe he’s already 17 years old… but I am so proud of him and the man he is becoming!

Our friends, Taylor & Wesley, threw an Ugly Sweater Christmas Party on December 8th, which was so much fun! We played White Elephant and some other fun board games. My mom made hers and Jordan and I’s ugly sweaters and they turned out awesome! Also, Scarlett loves Jordan if you can’t tell. ❤️ 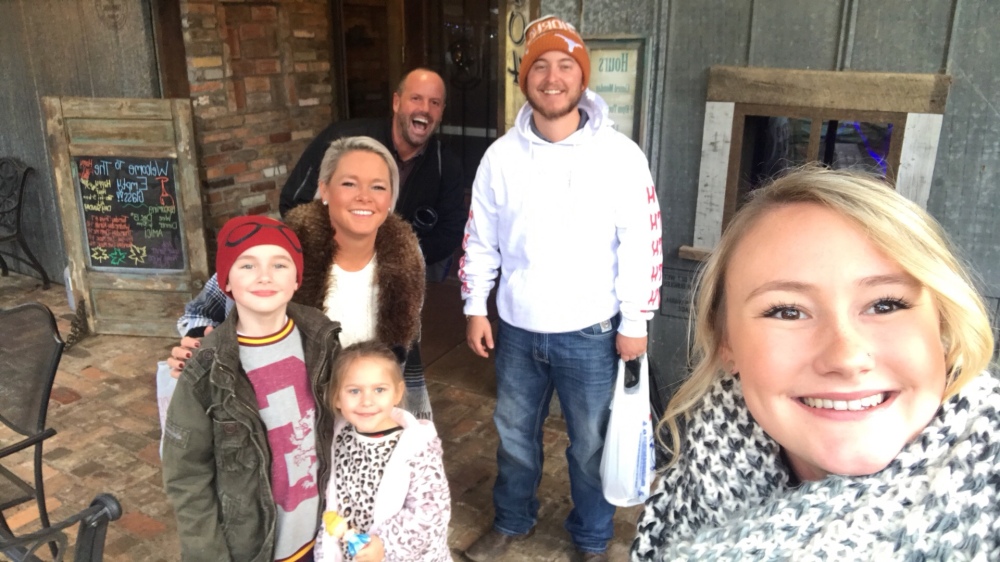 The following Sunday, Jordan, Mila, and I met up with my parents and Hudson at the Tomball German Festival. This is a festival they hold in Downtown Tomball about twice a year, but we love going to the one in December because it’s decorated for Christmas and they also have so many unique little shops that are perfect for getting some Christmas gifts.

When we left the German Festival my Dad decided to buy some Elton John tickets for the four of us as a spur of the moment adventure. IT. WAS. INCREDIBLE. I can not believe we were actually able to go. I almost started crying from the excitement of being able to see him sing live and he did not disappoint one bit! I was so impressed with how great he still sounds and how active he still is during concert.

Jordan & I were both so grateful for being able to go experience this with my parents and we also had such a fun time bar hopping with them in Downtown Houston afterwards. 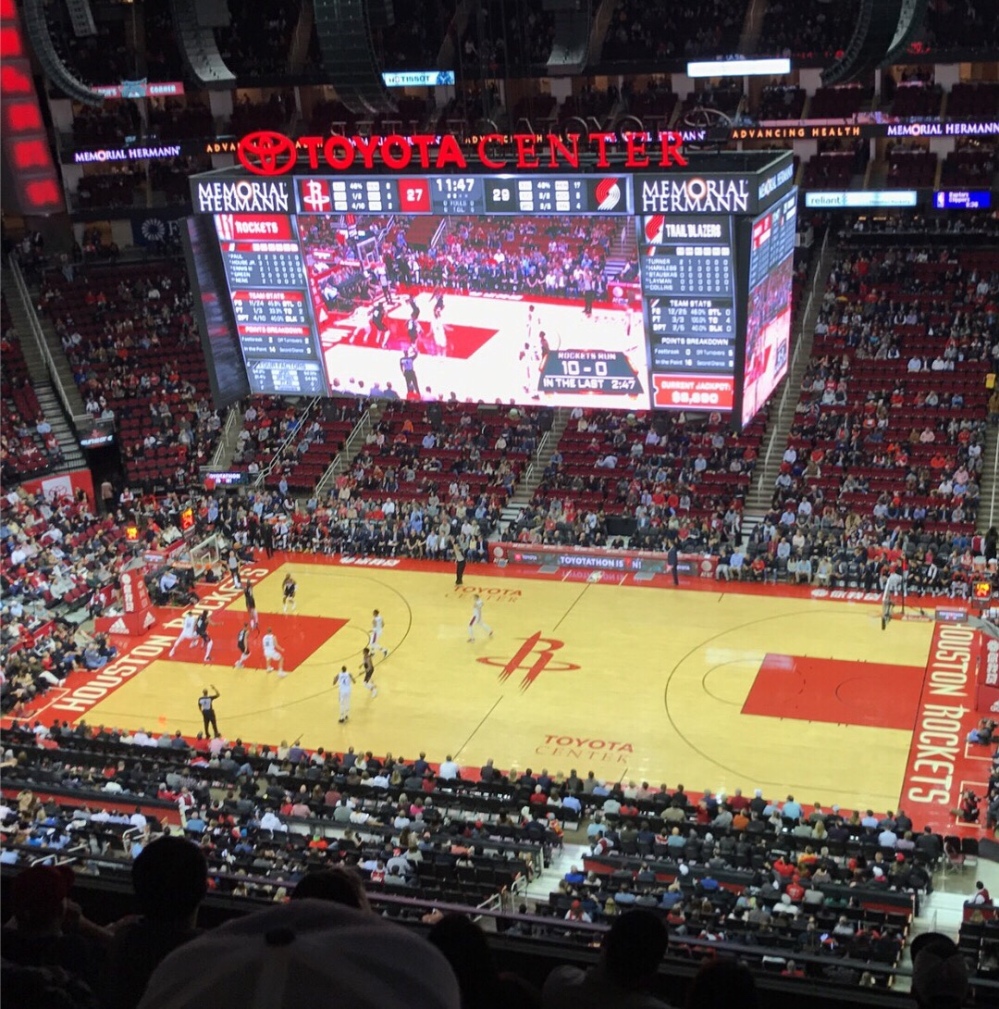 On Tuesday, we went with Taylor & Wesley to my first ever Rockets game (thank you Jordan 😘)! It was so much fun to watch in person & they ended their losing streak that night, so I think we need to go more often. Jordan loves to use the Gametime app to score seats to sports events for awesome prices. We sat up a little high, but we could still see perfectly & our tickets were only $11 each (that’s a score if you ask me)!

After the game, we walked about a mile to find a place called Frank’s Backyard, which is a cute, little outdoor/indoor bar. We ordered some beers & got some seats on the balcony. We played King’s cup & heads up the rest of the evening. It was such a fun night!

The following weekend was busy, busy, busy! It started off Friday with Brittany’s graduation from the University of Houston. It was awesome getting to cheer for her as she walked across the stage. It is such an amazing accomplishment to graduate & I am so proud of her!

We headed over to Pappasito’s after the graduation ceremony to celebrate Brittany! The food & margaritas were delicious! 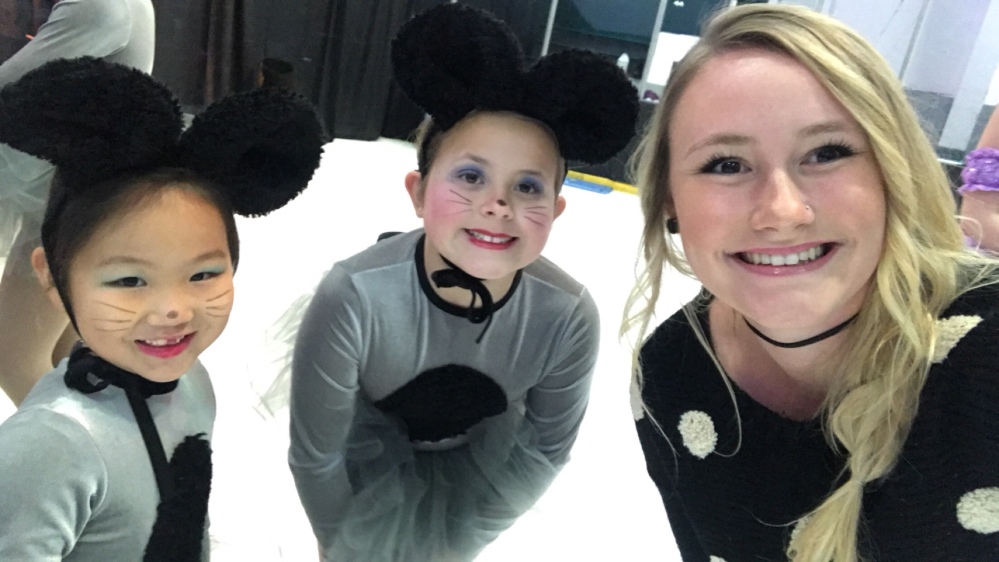 Saturday was a very long day! It started with the Nutcracker on Ice, which did amazing this year, with each show being completely sold out! I was able to be in charge of costumes again this year and everyone loved how they turned out, which made me very happy!

Jordan’s family had a Christmas party later on that day. We had dinner, relaxed by the fire, and exchanged gifts.

The following Sunday was my family’s annual tradition of Christmas PJ Movie Day! We had a pretty big group with us this year. We all enjoyed a delicious breakfast at my grandparents house before heading to the theater to see the new “Grinch” movie. I thought the movie was really cute, but the Jim Carey version will always be my favorite.

The next week was filled with Christmas shopping, working, and getting the apartment ready for Mila to arrive. Mila arrived on Wednesday, so I made some chili for us to enjoy and we all watched a Christmas movie together.

On Saturday, we went to my aunt and uncle’s house to celebrate my uncle’s birthday. We all had lunch and hung out together while the kiddos had a blast playing.

That same evening we celebrated Jordan’s Dad & brother’s birthday at his parents house. We had pizza and cake and watched the new “Jurassic World” movie.

We went to the candlelight church service with the Muse’s on Sunday morning followed by some BBQ for lunch at Goode Company, which had the best mac & cheese!

Later that evening, we made some hot chocolate and headed out to look at Christmas lights with Taylor, Wesley, and Scarlett. 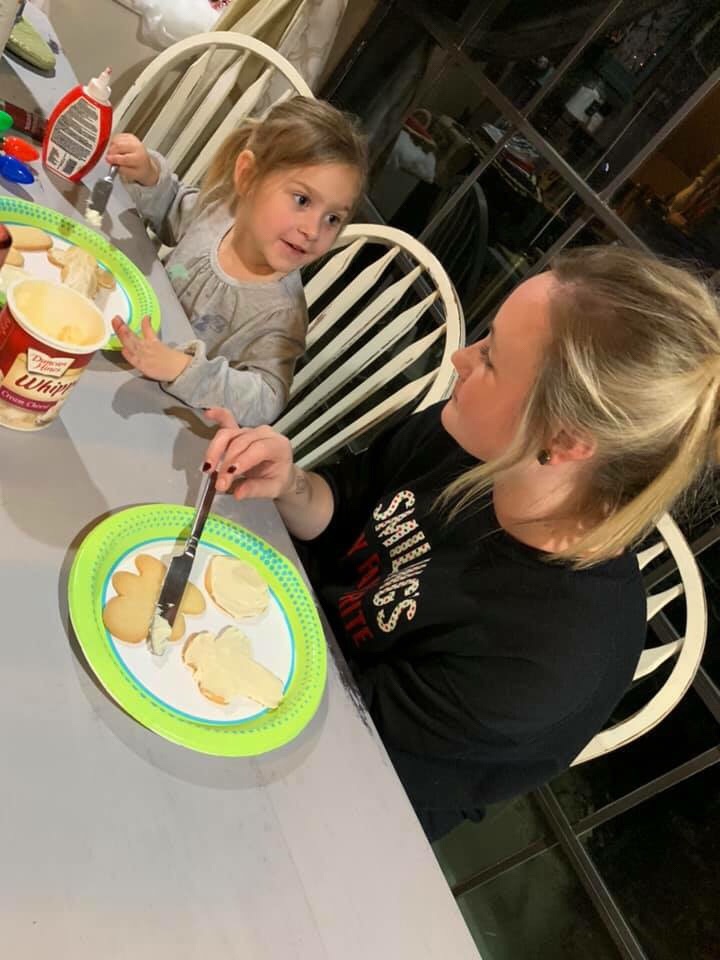 We spent the day of Christmas Eve doing some deep cleaning around the apartment before heading over to my parents house. We baked and decorated cookies, had sushi, and played board games that evening. It was such a fun night.

We arrived home around 12am ready to play our parts as Santa and Mrs. Clause. Oh how fun it was to build Mila’s Barbie dream house, set out other goodies for her, and try our hardest to eat cookies covered in layers & layers of sprinkles. I’m excited to do this every year with Jordan in the Christmases to come. 🎅🏻🤶🏻 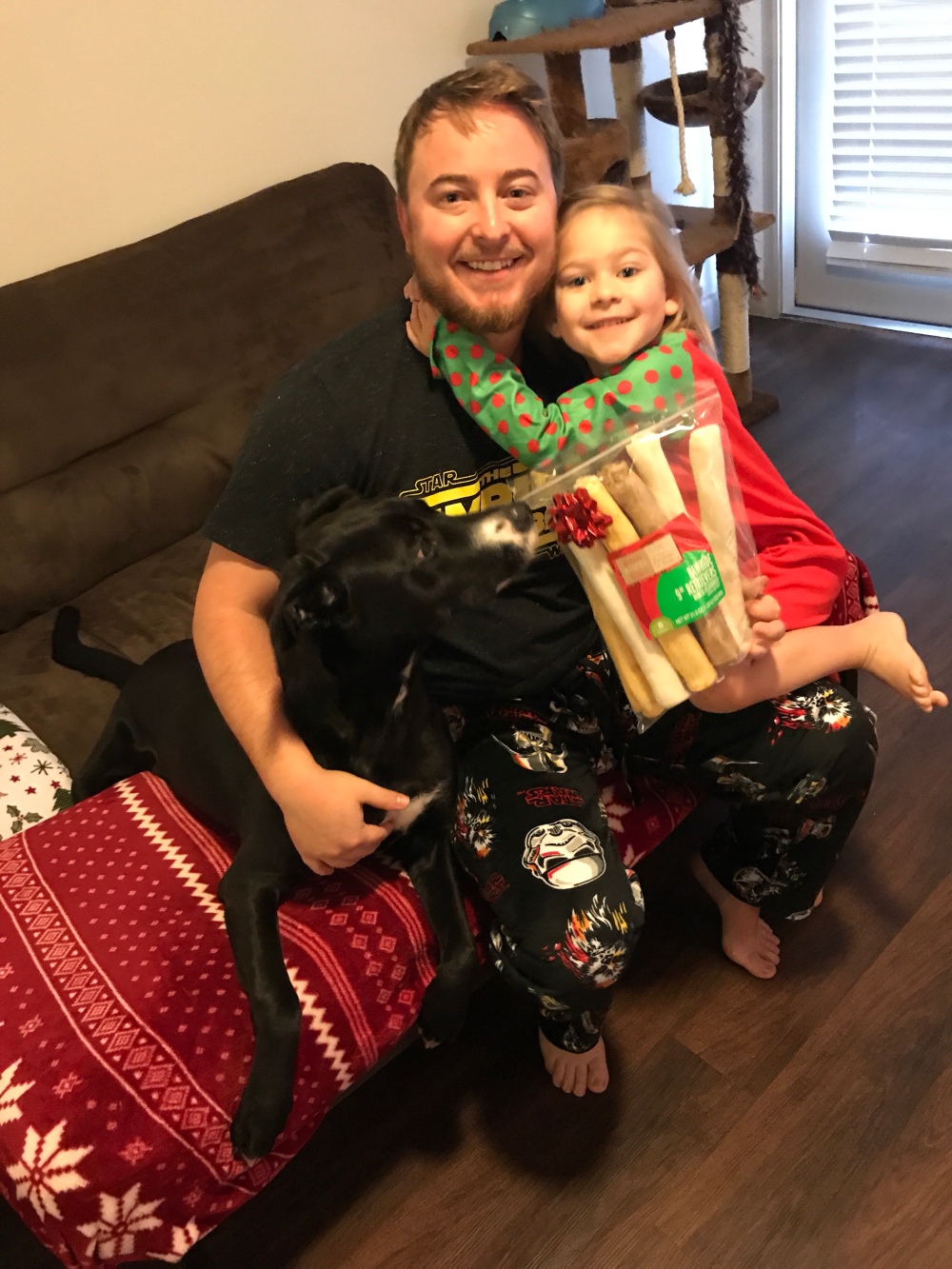 Christmas morning, the three of us woke up to exchange gifts, see what Santa brought, and have breakfast together. Mila was so stoked to see her Barbie dreamhouse and new princess bedding.

We spent the early afternoon at my family’s house exchanging gifts and eating yummy snacks & the later afternoon/evening with Jordan’s family. We exchanged more gifts and enjoyed a delicious prime rib dinner.

We had such a fun-filled day spent with both of our families. We also loved getting to see everyone’s faces as they opened all their gifts from us. It was definitely a successful Christmas!

The day after Christmas, my whole family came over for dinner! I made Southwest Ancho tilapia with cilantro lime rice, zucchini, and squash for the adults & mac “n” cheese for the kiddos. We enjoyed dinner together, gave my parents a tour around our place, and went to the clubhouse for a game of kings cup, pool, and shuffle board.

The following day was Mila’s last day with us for Christmas break, so we took her to go see the new “Bumble Bee” movie, which was so cute and she loved it! We had such a great Christmas with her and can’t wait to see her again. ❤️

Jordan went away to hunt this past weekend, so I tried to fill my time with fun things to do so I didn’t miss him too badly (I still missed him though..)!

Friday evening, I met up with my friend Marlu and her boyfriend, Justin, for some wine at Brix Wine Cellars. I had such a great time catching up with the both of them and enjoying delicious wine. I met up with my family afterwards for dinner at Olive Garden and it was yummy!

I didn’t get any pictures, but Saturday night was my grandfather’s birthday party and we had at blast at his house with friends and family while also singing a bunch of karaoke. 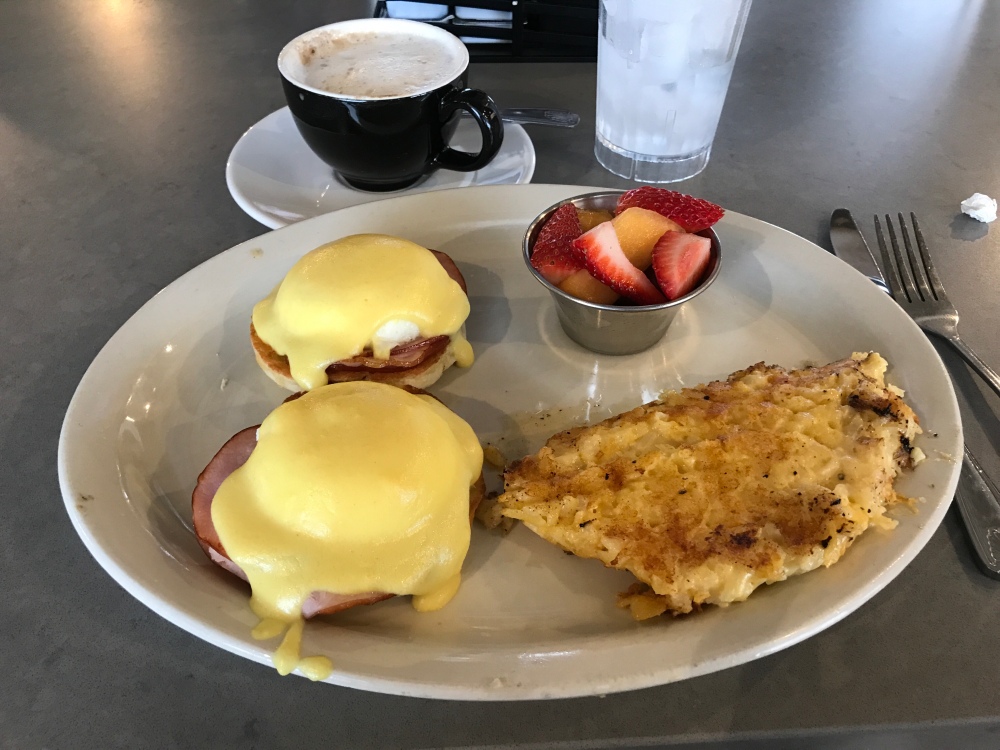 Sunday morning I met my friend, Taylor, at the toasted Yolk for breakfast. We each ordered different versions of eggs Benedict and hazelnut lattes. After breakfast, we hurried over to the movie theater to make it to see “Mary Queen of Scots” in time. I really enjoy watching movies and TV shows that involve history and royalty and this movie was fairly good. I personally thought it was a little long and there were things that could’ve been left out, but I’m glad I went to see it and I’m so happy Taylor came with me. 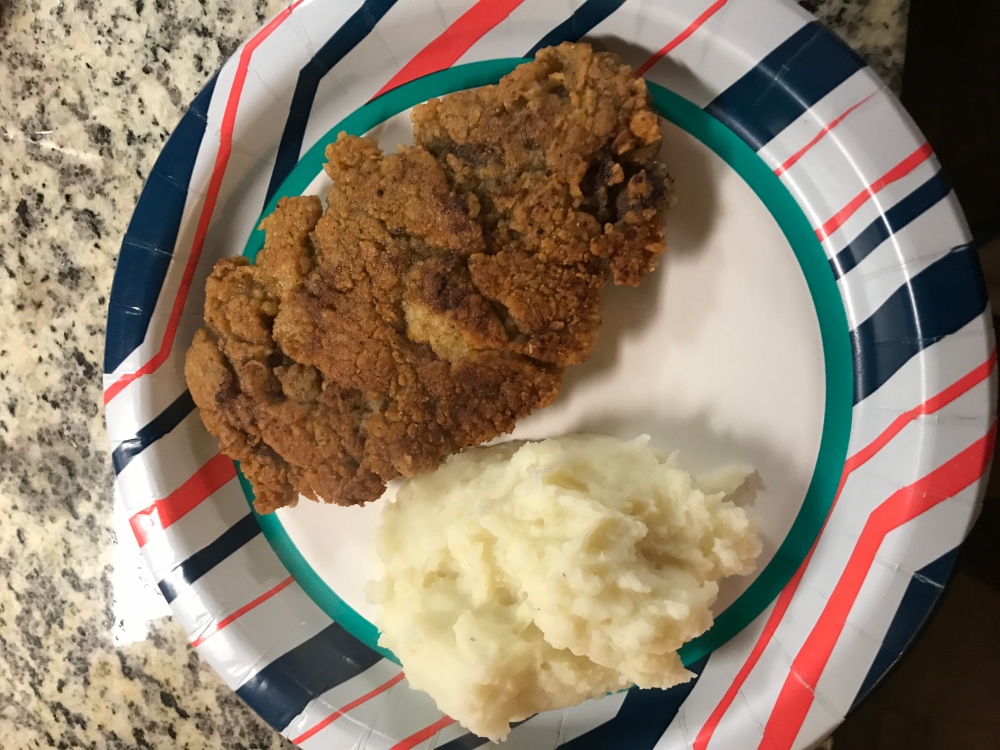 Jordan came home later that afternoon & I was so excited to see him. I made some chicken fried backstrap (from and axis) for dinner with mashed potatoes. I had never made chicken fried anything before, but I was excited that it turned out pretty well, however I did totally screw up the gravy…but we don’t need to talk about that.

I had such an incredible month of December with so many special people! This time of year always passes by so quickly, but I am truly grateful for every bit of it and am so excited for everything to come in this new year! I hope that y’all had a Merry Christmas and Happy New Year! I’ll be back with my weekly recaps starting this month, so y’all will be hearing a lot more from me (and shorter posts 😉)!